For Halloween this year, I dressed as a Geisha, or more appropriately I wore the kimono I had bought in Japan accompanied with my best approximation of traditional white facial makeup and put my hair up. Mostly I wanted an excuse to wear the kimono, and I wanted to do my very best at both wearing it properly (given my lack of certain accoutrements), and doing justice to the makeup (which is something I'll admit to not being terribly skilled at. 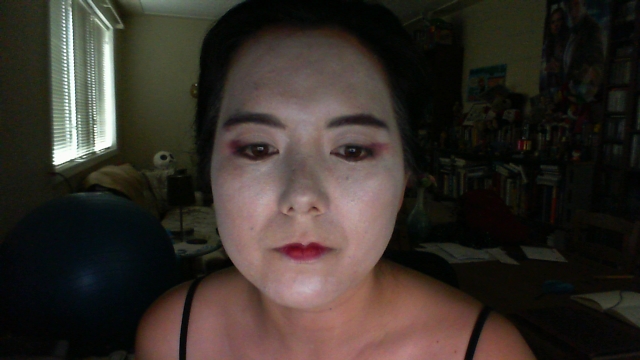 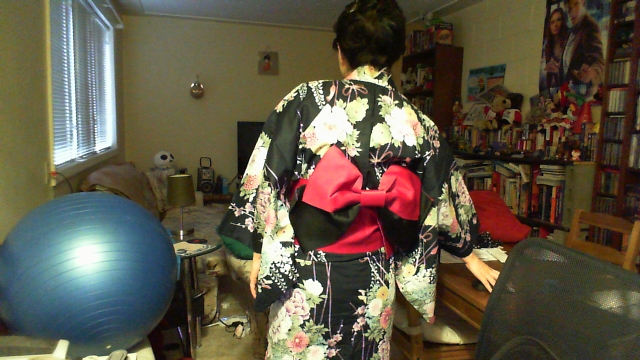 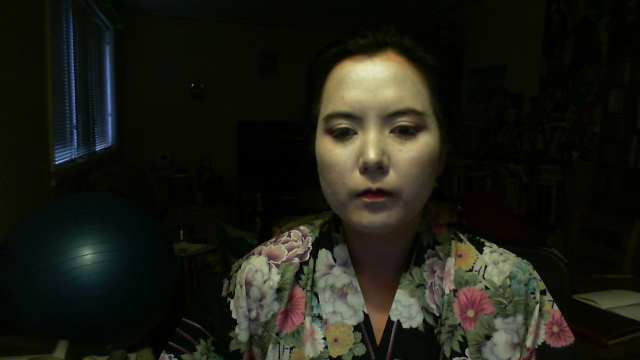 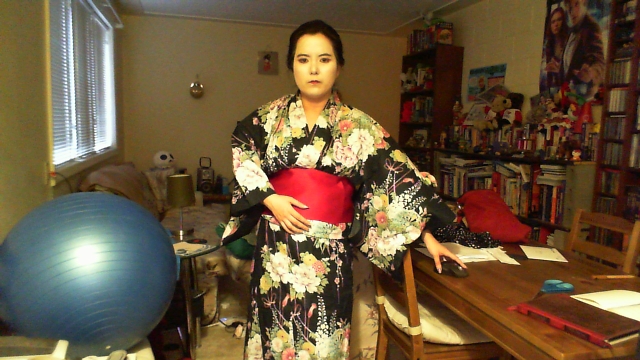 Those are pictures chronicling my costume adventures.

I wasn't trying to dress as a stereotype or as anything but what I described above, and I think that I'm more able to 'get away' with such a costuming choice than other folks might, because I do have Japanese heritage. It is rare that a month goes by without some sort of recognition from a stranger that I look foreign and NOT-white, that I am somehow Asian, or from some sort of visible minority, and while many of these comments are not made with any ill will, some of them certainly are off-putting, insulting, and belittling. It felt somehow empowering to recognize my own heritage in some little way, even if only in the form of a Halloween costume (I'm not sure that I'd have the guts to wear a kimono without some sort of special occasion to do so).

So, I think while my costume COULD be taken the wrong way by folks, I don't think that that's the normal reaction to it. I got a few strange glances on the LRT, some odd looks by passerbys last night, and although I like to think I am pretty visible in this outfit, a car sped up to almost try to run me over on my walk to the LRT station and I have no idea whether that has anything to do with what I was wearing. I like to think that these things were unrelated.

Still, this was a year where I was hyper aware of the presence of many less than appropriate costumes worn by people. On the LRT I spotted a guy dressed as Mike Tyson for example (complete with the facial tattoo… I'm really hoping it was a Halloween costume though none of his pals were in noticeable costume so I worry that it wasn't). I felt uncomfortable seeing that. On Facebook I saw someone in my network's picture dressed as a cowboy with his significant other as an indian (and not the type of Indian from India, mind). Another person dressed as Jian Ghomeshi, and while that's perhaps a timely costume particularly if they were trying to be scary, I was not at all comfortable with seeing this as a costume. There were other instances of course of glaringly 'inappropriate' costumes, but those were the ones I noticed most strongly, which made me reflect on why I deemed my own costume to be appropriate rather than simply some sort of stereotypical appropriation of another culture.

And you know what? My experience just assembling/putting on my costume gave me even more respect for the Japanese traditions involved in wearing kimonos (mine was a simple summer-weight yukata), and those involved with the hair and makeup most often associated with Geishas. I like to hope that my positive experience is the type of experience that one should have with cultural costumes, but I doubt that always to be the case.